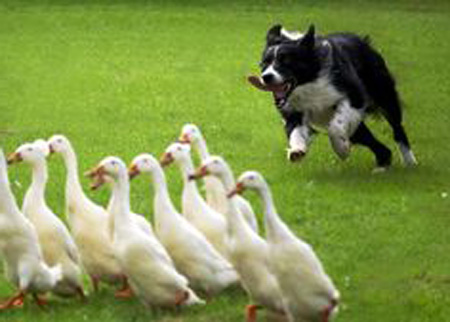 Wildlife airstrikes killed more than 13,000 birds and other species of wildlife in 2014  Many of these lives were lost needlessly.  Air Traffic Patrol dogs.  Also known as humane wildlife control dogs are experts at moving migrating birds and other wildlife animals to safer areas.

Airstrikes with wildlife is a huge disaster.  Much of these occurrences go unreported and are responsible for hundreds of millions of dollars in damages.  This results to a huge loss to our ecology and a staggering cost of more than $600 million to the airline industry.

It is not just birds

There have been more than 500 other incidents involving wildlife, but the FAA does not mandate the report of collisions with animals and as few as 42% are ever entered into their database and this is still a 19% climb in the trend.

Most aircraft collide with animals when the plane is either on the runway or preparing to take off or land.  This means that and massive number of lives could possibly have been saved and a huge amount of money as well.

There is no doubt that there are huge safety concerns at stake.  Both wildlife and air passengers are in danger of being killed or injured in these collisions, but what is the answer?  Past practices have been to poison the birds.  Poisoning our wildlife may have gotten rid of nuisance animals. However, that solution caused many imbalances in our ecological system.  It changed the numbers of predators and prey and the more prey animals we poisoned the more predators we starved.

With the reduction of prey animals, we have forced predators to leave their homes in the forests and relocate closer to the population.  This has caused an increasing number of sightings as well as personal encounters of a more dangerous kind.

Birds are The Largest Threat

Birds represent the biggest threat due to the fact they can smash a pilot’s windshield and be sucked into engines.  Do you remember the near fatal disaster in 2009 that occurred slightly after takeoff from JFK?  That was an airstrike that made national news. It was caused by a flock Canadian geese who were killed after being sucked into an engine and it dumped an airliner into the Hudson River in busy Manhattan.  Thanks to the skill of the pilot a larger tragedy was averted and there were no human fatalities.

Today we are starting to use a commonsense approach to conserving wildlife and keeping our airways safer.  At this writing there are approximately 10 air traffic patrol dogs working to detect and remove wildlife from our airports and runways.

One such dog is a border collie named Piper.  Border collies are well known to be friendly, intelligent, hardworking dogs with an affinity to being able to move livestock of all kinds.   Not only are these dogs doing important dogs at airports, but a growing number of other venues are using them as well.

Dogs like Piper work with a handler to detect, locate and move wildlife from an area without causing any harm to the animals.  These dogs work from sunup to sundown 7 days a week at the direction of their handlers to efficiently manage wildlife.

Imagine what a huge job it is to keep birds from nesting and soiling seating in sports arenas and other outdoor events.  Some places have tried other means of scaring off the wildlife with limited success.  Trapping is both expensive and costly.  Signal cannons only work until the birds get used to the noise, but the use of trained wildlife removal dogs is safe (no noise pollution and nontoxic), humane and cost effective.

**Note** We are not associated with Piper, his owner or his training.  We refer to him as an outstanding example of the capabilities of a wildlife control dog.

To find out more about how a trained dog may help you achieve your facility’s objectives call 905-988-8800.