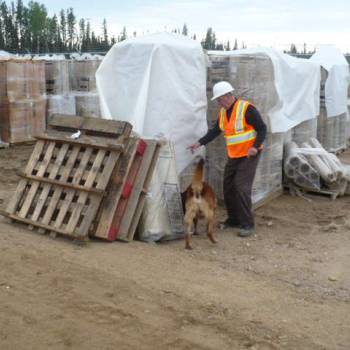 Bomb detection dogs undergo an intense amount of training.  The training begins by choosing a number of candidates and progresses through the selection processes starting with a complete battery of tests.
Dogs are evaluated both physically and mentally for stability and suitability for the tasks required of an explosives detection dog.  This health check is more than a routine exam.  It includes x-rays and blood work before moving to the next step.

In basic EDD training the new recruits are taught a light obedience course.  The commands taught are sit, stay, come and heel.  This is not a formal type obedience, but rather taught with motivation and play and does not include rigid competition style obedience exercises.
Then the dogs are introduced to scent work.  In this phase the dog is initially introduced to a single odor and taught to focus on that particular odor while avoiding different distractions.  The complete training program for a bomb detection dog may last 12 to 14 weeks.

Bomb detection dogs come in all different sizes, colors and breeds.  You can find a suitable explosives dog candidate in many of the working, hurting and sporting dog breeds.  Some of the most popular dogs selected for explosives work are retrievers and spaniels.
These dogs have a more positive public relations image and appear less intimidating to the public while working in crowded spaces such as airports.

Choosing the right detection dogs for the job

Detection Dogs for Fun and Sport
Comments are closed.